I started playing with Tumblr.com. Tumblr is pioneering the concept of "reblogging" with a strong emphasis on photography and video.

I began "reblogging" images from the Mountain West on the tumblr blogs. I will break things out by state. The blogs are: Utah Color (which focuses exclusively on Utah), Arizona Color (which focuses on the Grand Canyon State). I will post general pictures on Community Color.

Most of the images are from other photographers with a small number of my own photos mixed in for show.

The one big problem with Tumblr is that, with all the reblogging of photos, it becomes difficult to sort out the photographers from the rebloggers. A smart way to approach Tumblr is to create your own private gallery (or use a service like flickr, then to reblog your photos on tumblr.

In my case, I created my own gallery on Protophoto.com and added a tumblr button so that I can reblog the photos.

I will be happy to reblog images from your tumblr site, just drop me a line on the contact screen or friend me on Tumblr.

The feature I like best with tumblr is that the site creates a rolling archive for each of the the blogs. The image below shows the archive for Utah Color after I reblogged a few images. Here is the archive for Arizona Color and Community Color. 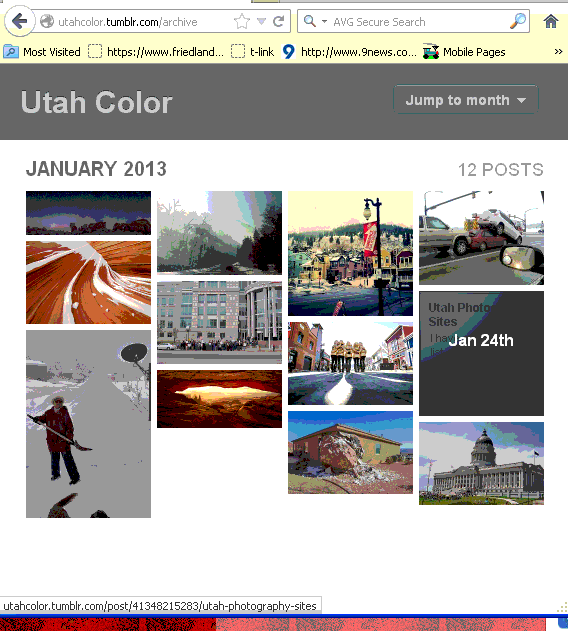